Ever since the live action adaptation of Beauty and the Beast was announced the internet has been going crazy digging around Disney Princess facts. When the story broke that Cinderella, Tiana (from Princess and the Frog) and Belle (from Beauty and the Beast) all shared a unique common trait with one another, we got to thinking. Cinderella, Tiana, and Belle are as different as three Princesses could be but there seemed to be some overlay. We decided to dig deep into these characters and bring out some of Walt Disney’s most surprising facts and details about these beloved characters. Keep reading to find 10 amazing details about Cinderella, Tiana, and Belle that will leave you breathless.

Belle is the only person from her village to wear blue.

There is an old joke going around that riffs on animated character design. Essentially any time we see an ornately detailed character we make the immediate assumption that they are the primary protagonist or antagonist. When Disney’s animated Beauty and the Beast released in 1991 it showcased some of the finest animation of the time and this obviously was showcased in the team’s attention to detail. Belle, the princess of the story, was in fact the only character from her village ever seen wearing blue. You can watch movies online all over the place and not notice these small details. However, Disney did notice it and the decision was intentional — to showcase that Belle was uniquely different from everyone else. 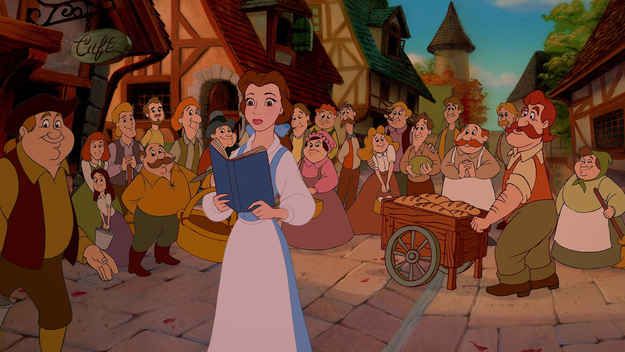 Belle is the only person from her village to wear blue.

Tiana is one of the few Disney Princess characters with a healthy, rounded family.

We aren’t sure if it is a requirement in the world of fantasy that our heroes be portrayed as dirty orphans, but it is a trope all the same. In fact, you can take a long look down Disney’s fantastic Princess characters and you will find that most of them are afflicted by this trope. Tiana, from Princess and the Frog, boldly bucks the trend. In this beautiful live action film, which shortened up would win any short film competition in animation, Tiana has a loving father and mother who both teacher her the values that she will carry forward in life. No tragic opening showcasing Tiana growing up alone. Just a regular, beautiful, happy family. It’s a nice break from the heart ache. 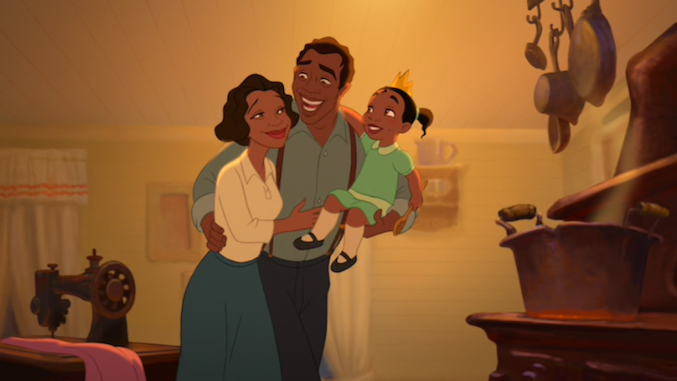 Tiana with her family

Belle makes an appearance in another Disney favorite!

Belle is one of the most iconic Disney Princesses of all time and it only makes sense that the production studio would want to sneak her into other films. The people that love to buy movies will pick up Disney films solely to find these little details. If you ever watched The Hunchback of Notre Dame, another animated Disney favorite, there is a specific point in time where you can see Belle reading a book in the background. Keep your eyes open and you’ll see Belle and her traditional blue dress, her nose in a book, as the camera swerves by. You can also spot Aladdin’s Carpet as well as Pumbaa if you look close enough. There aren’t any speaking lines delivered by Belle but it is nice to see that she’s still around. 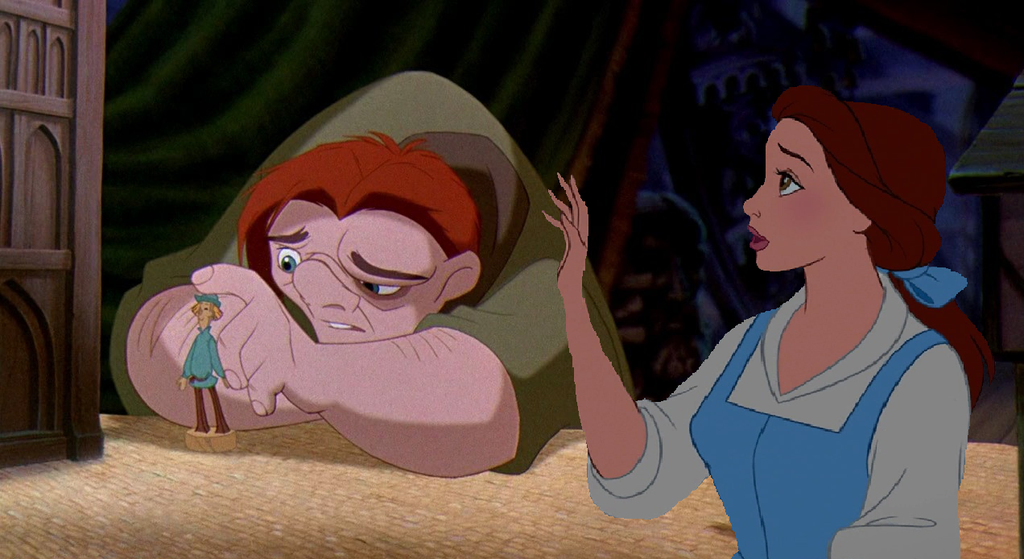 The Hunchback of Notre Dame

Ilene Woods, voice of Cinderella, sang all her vocal tracks.

The first animated feature film from Disney came out way back in 1937 with Snow White and the Seven Dwarves. With how timeless Walt Disney’s stories are it is easy to forget that he’s been around forever. Cinderella, one of the most beloved animated films of all time, released in 1950. Ilene Woods, who voiced the original Cinderella, revealed in an interview that she sang both her primary vocal tracks as well as her harmonies. This is a common practice nowadays due to the ease of digital recording, but back in 1950 it was really progressive. In fact, Walt Disney is perhaps the first person to have ever had one performer record both layers of their track! 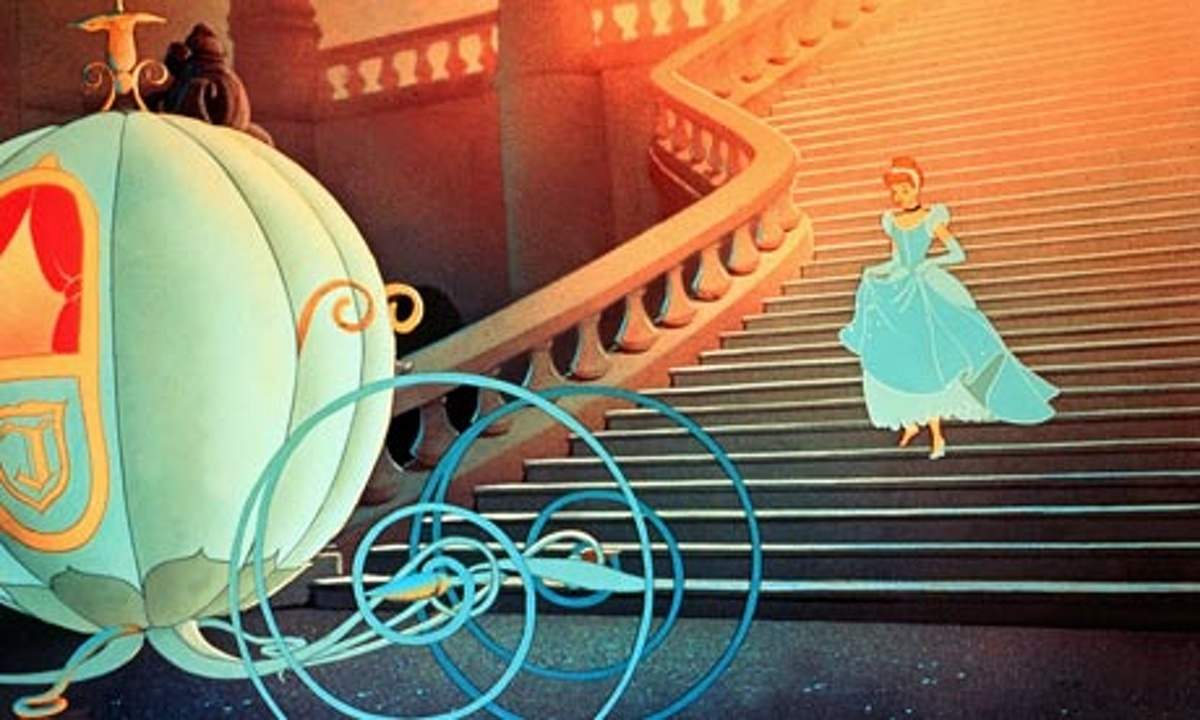 Cinderella had scenes cut from the film because they were unflattering.

Cinderella is the very image of hard working, humble, and absolutely deserving of more. Every iteration of the popular Disney story has Cinderella slaving her way into the realm of audience sympathy so that they can cheer her on when she lands her big break. However, in the original Cinderella release there was a scene which showcased the Princess in less than positive light. An initial scene had Cinderella eavesdropping on her malicious step-family as they gossiped about the ‘mysterious woman at the Ball’. Cinderella apparently looked too happy at their gossip and Walt Disney thought that it made the Princess look spiteful — not a good look for sympathy winning. 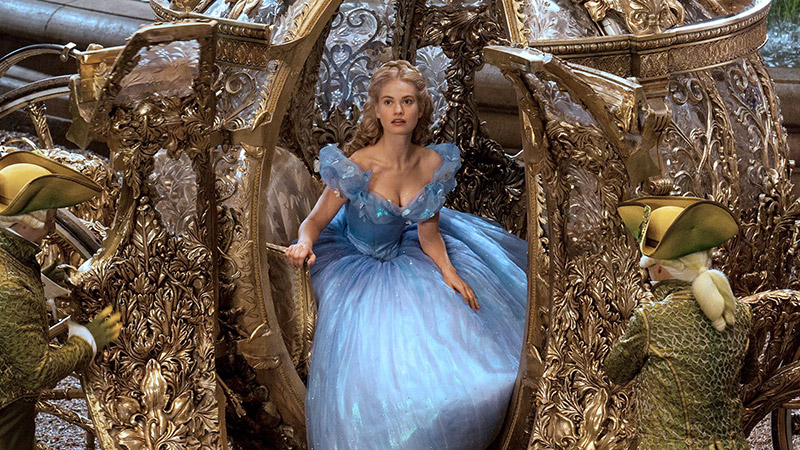 This is the epitome of ‘small details’ that you might have missed. In the film Princess and the Frog our heroine, Tiana, is left handed. The reason for this quirky decision? Apparently Anika Noni Rose, the voice actor, had put in a request — and why not? Tiana also has the same simples as Anika though we aren’t sure that this one is actually upon request. 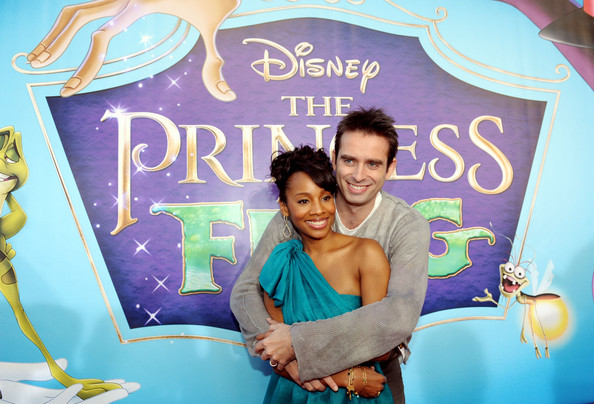 Belle and the Beast stole their final dance!

In one of the most heart warming moments in Disney history we get to see Belle and the Prince dance away, finally mirroring each other in both love and looks. However, voracious Disney fans may notice that their finale dance looks awfully familiar. That is, in fact, because it was entirely reused from Sleeping Beauty. The original dance was between Princess Aurora and Prince Phillip. In order to save money, and time, the dance was reused with the new characters overlayed instead. Disney is actually notorious for reusing dancing animations. 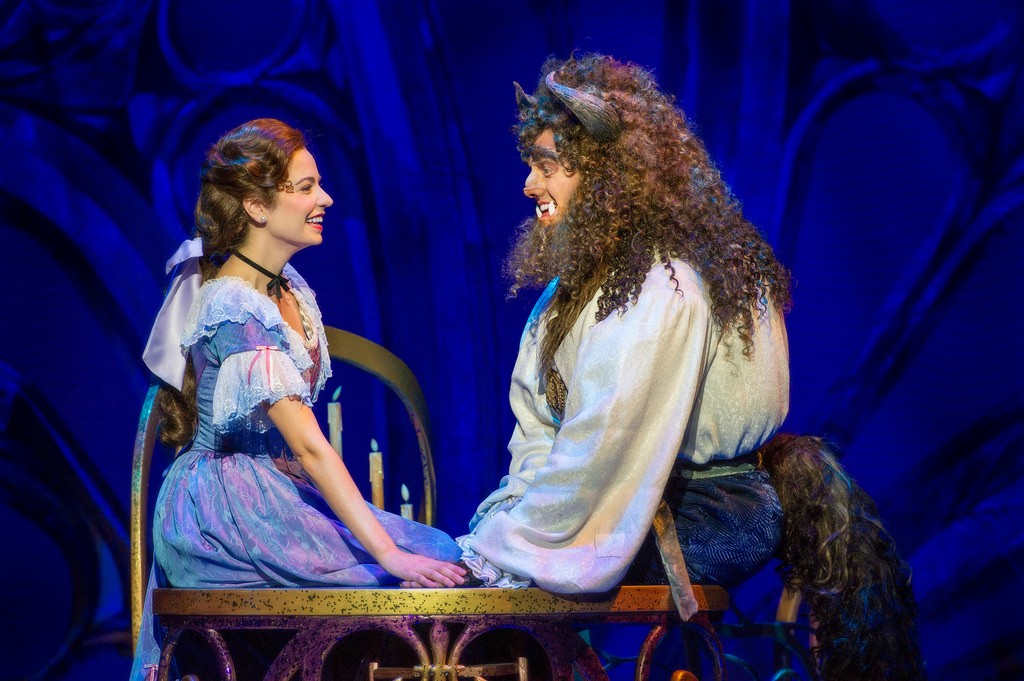 Belle and the Beast

For the sake of work load you will typically see that many animated characters reprise the same outfits over and over again. Not only does this make for an easier job for the animators, but it also gives the main character a titular outfit that can then be used as a marketing tool for merchandise in the future. Tiana bucks the trend of only wearing two or three different outfits in her film, instead racking up an incredible 11 different wardrobe changes. 11 different clothing outfits means that the animators spent plenty of time trying to get all of their details precisely right, and the work is showcased in the beauty of the film. If only more Disney Princesses got a chance to wear something fresh. 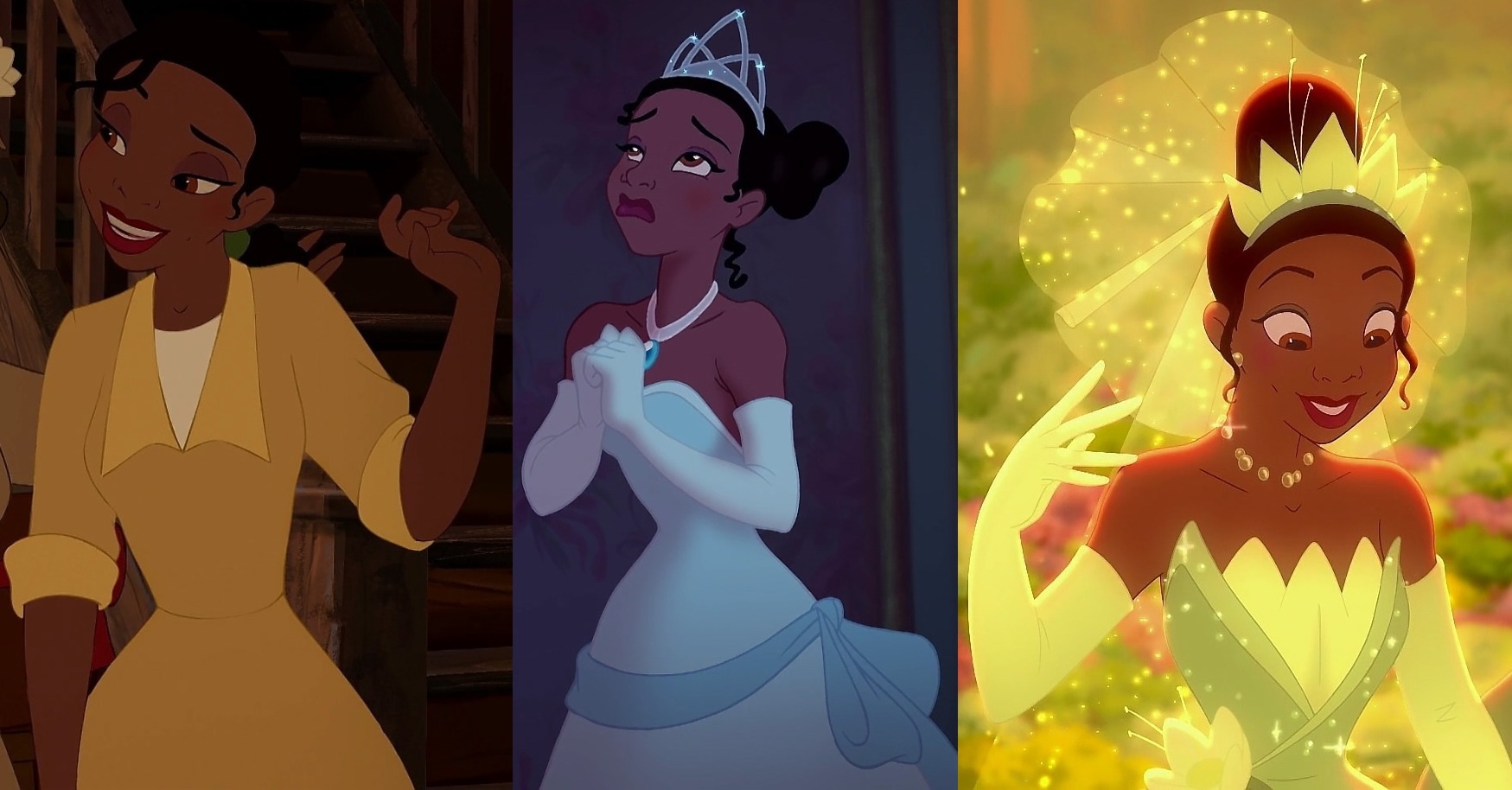 Tiana and her different outfits.

Cinderella is the oldest of all Disney Princesses.

We aren’t talking about chronological release date either, as Snow White would then take the honor. Instead we are talking about the characters canon age. Cinderella is 19 years old when she is featured in her film which puts her at the top of the list, followed closely by Tiana from Princess and the Frog. Cinderella is also the first non royal Princess in Disney history, also followed by Tiana and Belle. 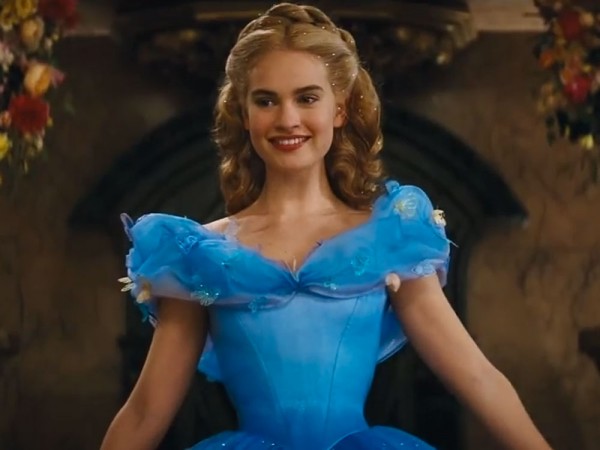 Cinderella is the oldest of all Disney Princesses

Tiana is the first Disney Princess with a job!

While there is definitely no denying that other Disney Princesses had it rougher than Tiana, you can’t ignore the fact that Tiana herself is the first independent Princess with an actual job. Tiana didn’t go to college, didn’t attend any fancy schools, but she still works for a living while making her own money. This allowed the writers to further give Tiana another dimension: as someone who is both hard working and completely self reliant. Tiana doesn’t need a Prince to come sweeping in to pay for all of her needs and desires. Mulan is also up for contention but she was never paid for her work in the Chinese army. So as far as a weekly paycheck, Tiana remains above the rest. 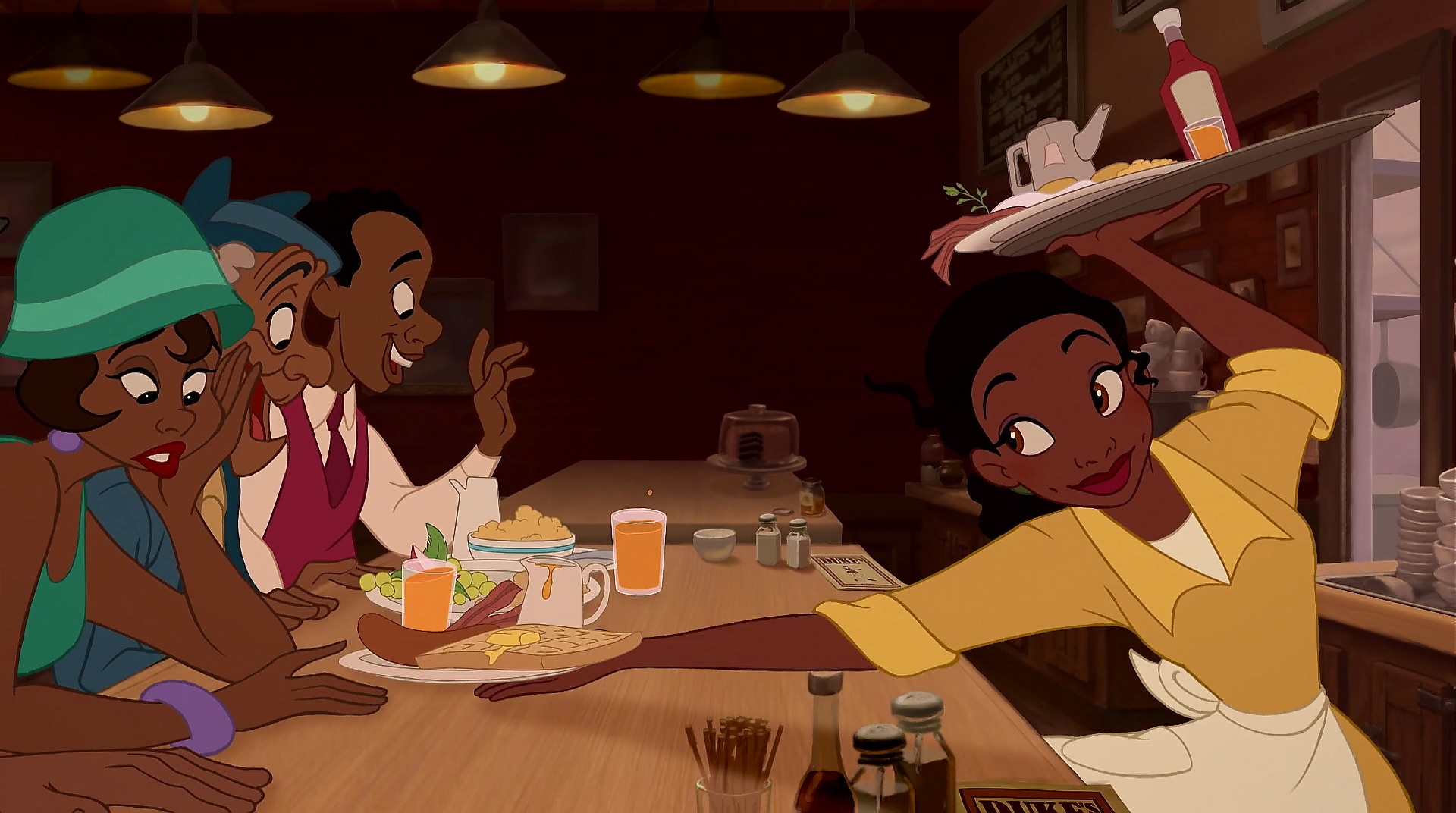